One of my cases involves the examination of an Apple Mac running Mac OSX 10.5.6 Leopard . The primary web browser in use is Safari version 3.2.1. Typically with Safari I run the Comprehensive Internet History search in Encase but in this case the search would not complete so I had to consider another method to recover and review internet history. Browsing history is stored in a binary plist ~ /Users/User_Name/Library/Safari/History.plist however the live one was empty. I recalled from a much earlier case that you can carve deleted plists from unallocated. I had documented a method for doing this over at www.forensicwiki.com but at the time of writing this resource is still offline.

One of the best file carvers around is Blade and I decided to use it to recover the deleted History.plists. Blade has a number of pre-configured built in Recovery Profiles but there wasn't one for Safari. However one of the neat things about Blade is that you can write your own profiles and share them with others. In conversation I had found out that Craig Wilson had written a Safari history.plist recovery profile which he kindly made available to me (after all why re-invent the wheel). I imported it into my copy of Blade and I was then good to go. 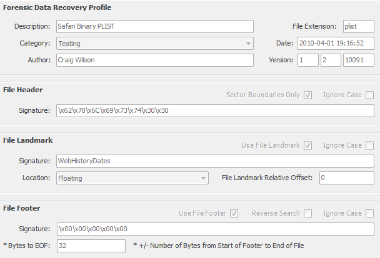 
Another really neat feature with Blade is that you can run it across the Encase evidence files without having to mount them. Having done this in my case Blade recovered over three thousand deleted History.plist files. I then loaded the recovered plist files into Netanalysis 1.51 resulting in over 300,000 internet history records to review. Cool.

It seems to me that more and more cases I see only have evidence within unallocated clusters. It is also a frustration that the CPS seem less and less interested in any artefact found there. They seem to have the view that any thing currently living in unallocated clusters somehow magically arrived there and has nothing whatever to do with the computer's user.

Obviously we try and address this misconception, by trying to investigate how the evidence in question came to be on the computer, and to a lesser extent how it came to be deleted. Which brings me on to another frustration - file wiping software. This is another thing I see more and more. Properly configured file wiping software eliminates the little fragments of evidence we use to piece our cases together.

Recently I was faced with this scenario - evidence could only be found in unallocated and there was file wiping software sat there in program files. Sentencing Advisory Panel guidelines allude to the presence of file wiping software being an aggravating factor to consider when sentencing. But in this case it occurred to me that it would be evidentially useful to know just how often my suspect used the file wiping software concerned. File time stamps may indicate when the program was last executed and installation dates can be discerned from a variety of locations (registry entries, folder creation dates and so on) but where do you establish how often the program was used? You never know -it may write to a log file or create event log entries but many don't. In my case the answer lay in two areas - Prefetch and User Assist.

Prefetch
My suspect was using Microsoft Windows XP. This OS (as the later Vista and Windows 7) performs application and boot prefetching. This process is designed to speed up the loading of applications (with regards to application prefetching) by storing data required by the program during the first ten seconds of use in a file - a prefetch file. These files are stored in the Windows/Prefetch folder and have a .pf file extension. The file names are a combination of the applications name and a hash of its file path. The hash may be useful in some cases because it could indicate that an application lives in more than one location (which is often suspicious). Some work on analysing the hash algorithm has been carried out by Yogesh Khatri at 42llc. The files themselves contain some useful information including last time of execution, the number of times the program was run and references to files and the file system utilised by the program in its first ten seconds of use. Unfortunately prefetch files are not differentiated by user. In my case the file wiping software had a prefetch file. There are a number of options open to us to analyse the prefetch file.

If all you need is the time of last execution and number of time the application was run for just one file you may as well do it manually. For Windows XP at file offset 120 an 8 byte Windows Filetime is stored which is the Last Execution Time. At file offset 144 the number of executions is stored as a four byte Dword. For Vista and Windows 7 the offsets are different - 128 and 152 respectively. 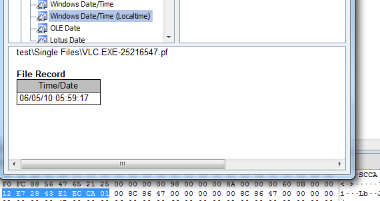 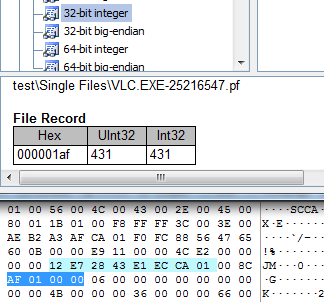 Bookmarking number of times the application was run

If you have a number of prefetch files to analyse or you wish to corroborate your findings you could try the Mitec Windows File Analyzer program or run an enscript. Guidance Software's download center has two enscripts that fit the bill. PfDump.Enpack and Prefetch File Analysis. Pfdump outputs to the console and the Prefetch File Analysis enscript outputs to bookmarks.

UserAssist
UserAssist is a method used to populate a user's start menu with frequently used applications. This is achieved by maintaining a count of application use in each users NTUSER.DAT registry file. I use Access Data's Registry Viewer application to parse and decode this information. Simon Key has written a cool enscript which is bang up to date with Windows 7 support. Detailed information, including the changes introduced with Windows 7, and the script can be found within GSI's download center.

In my case I encountered a possible anomaly in that the Prefetch and UserAssist run counts were different. With multiple users you would expect this as the Prefetch run count is not user specific. I had only one user in my case and the UserAssist count was significantly greater albeit that both were four figure numbers. A possible explanation is that if the application's prefetch file is deleted when the application is next used the prefetch run count starts again from 1.

Often a crime-drama television show will have a “single piece of evidence”, which explains the entire crime, and is used to get a guilty conviction. In real life very rarely does this situation arise. Instead typical investigations will uncover many pieces of evidence that are used during trial. Some of the evidence found during an investigation will be more persuasive to a jury, some will be less persuasive. However, it’s uncommon (and perhaps foolish) for a prosecutor to proceed to court with a single piece of evidence. What is somewhat more common, is for a prosecutor to proceed to court with multiple pieces of evidence, with perhaps one or two that are likely to be very persuasive.

One topic where the SPoE myth is often used is anti-forensics. Simply, anti-forensics is anything that a suspect does to hinder a forensic examination. Many of the sources of information that are used during an investigation (e.g. file system time stamps) can be easily modified. When a new anti-forensic technique has been discovered, there is sometimes a tendency to see the technique as a “silver bullet” which can halt an entire investigation.

The truth is, a single action (e.g. logging in, compiling a program, reading email, etc.) can impact many different aspects of the operating system, especially on a Windows system. Compromising the integrity of a “single piece of evidence” (e.g. the last accessed file system time stamp) is rarely fatal. This is because there are typically a number of places to look to find evidence to support (or deny) some theory.  Removing one piece of evidence may make an argument weaker (or stronger), but rarely does it invalidate the entire argument.