This blog entry announces the release of an exhaustive analysis of ComLook, a newly-discovered malware family about which little information has been published. It was recently discovered by ClearSky Cyber Security, and announced in a thread on Twitter. You can find the IDB for the DLL here, in which every function has been analyzed, and every data structure has been recovered.

Like the previous two entries in this series on ComRAT v4 and FlawedGrace, I did this analysis as part of my preparation for an upcoming class on C++ reverse engineering. The analysis took about a one and a half days (done on Friday and Saturday). ComLook is an Outlook plugin that masquerades as Antispam Marisuite v1.7.4 for The Bat!. It is fairly standard as far as remote-access trojans go; it spawns a thread to retrieve messages from a C&C server over IMAP, and processes incoming messages in a loop. Its command vocabulary is limited; it can only read and write files to the victim server, run commands and retrieve the output, and update/retrieve the current configuration (which is saved persistently in the registry). See the IDB for complete details.

(Note that if you are interested in the forthcoming C++ training class, it is nearing completion, and should be available in Q2 2022. More generally, remote public classes (where individual students can sign up) are temporarily suspended; remote private classes (multiple students on behalf of the same organization) are currently available. If you would like to be notified when public classes become available, or when the C++ course is ready, please sign up on our no-spam, very low-volume, course notification mailing list. (Click the button that says "Provide your email to be notified of public course availability".) )

This analysis was performed with IDA Pro 7.7 and Hex-Rays 32-bit. All analysis has been done in Hex-Rays; go there for all the gory details, and don't expect much from the disassembly listing. All of the programmer-created data structures have been recovered and applied to the proper Hex-Rays variables. The functionality has been organized into folders, as in the following screenshot:

The binary was compiled with MSVC 10.0 with RTTI, and uses standard C++ template containers:

The primary difficulty in analyzing this sample was that it was compiled in debug mode. Although this does simplify some parts of the analysis (e.g., error message contain the raw STL typenames), it also slows the speed of comprehension due to a lack of inlining, and includes a huge amount of code to validate so-called C++ debug iterators. This makes locating the real programmer-written functionality more time-consuming. STL functions involving iterators that, in a release build, would have consumed less than a page of decompilation, often consumed five or more pages due to debug iterator validation. 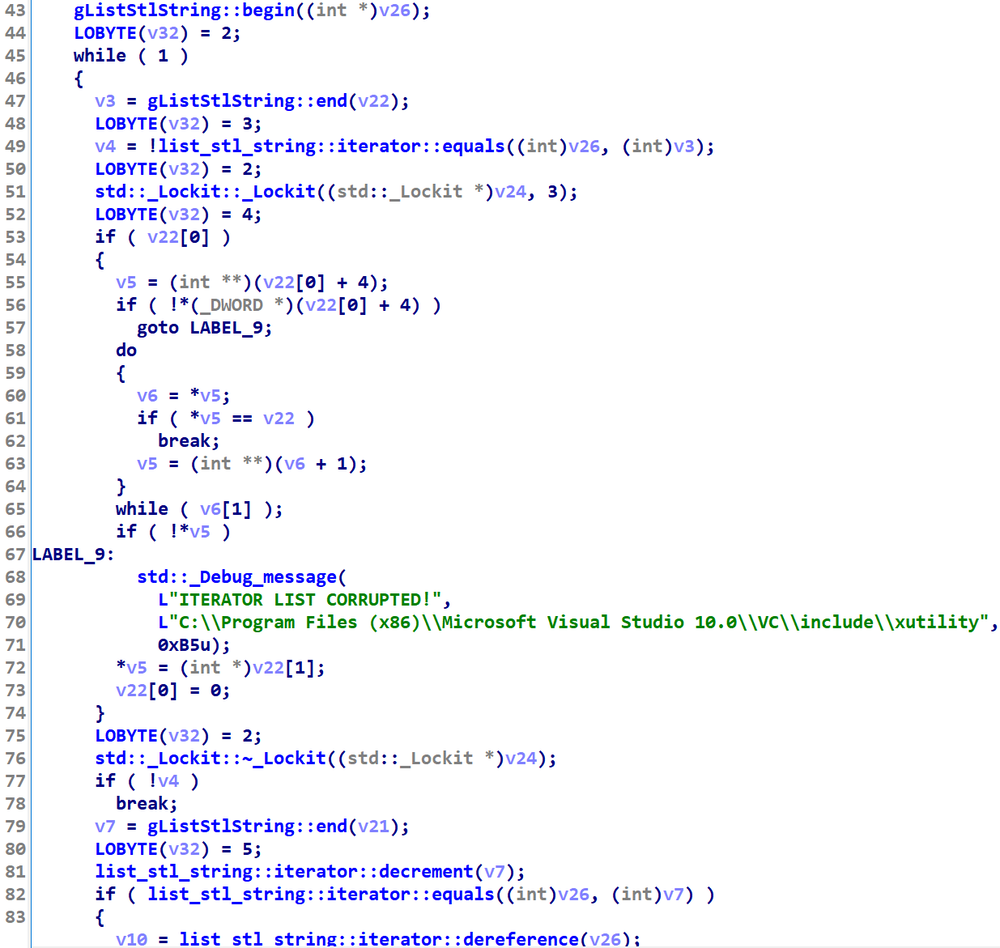 Determining in the first place that an STL container is being used, and which category, i.e., std::list

This entry is about how to make the best use of IDA and Hex-Rays with regards to a common scenario in malware analysis, namely, dynamic lookup of APIs via GetProcAddress (and/or import resolution via hash). I have been tempted to write this blog entry several times; in fact, I uploaded the original code for this entry exactly one year ago today. The problem that the script solves is simple: given the name of an API function, retrieve the proper type signature from IDA's type libraries. This makes it easier for the analyst to apply the proper types to the decompilation, which massively aid in readability and presentability. No more manually looking up and copying/pasting API type definitions, or ignoring the problem due to its tedious solution; just get the information directly from the IDA SDK. Here is a link to the script.

Hex-Rays v7.4 introduced special handling for GetProcAddress. We can see the difference -- several of them, actually -- in the following two screenshots. The first comes from Hex-Rays 7.1:

The second comes from Hex-Rays 7.6:

Several new features are evident in the screenshots -- more aggressive variable mapping eliminating the first two lines, and automatic variable renaming changing the names of variables -- but the one this entry focuses on has to do with the type assigned to the return value of GetProcAddress. Hex-Rays v7.4+ draw upon IDA's type libraries to automatically resolve the name of the procedure to its proper function pointer type signature, and set the return type of GetProcAddress to that type.

This change is evident in the screenshots above: for 7.1, the variable is named v7, its type is the generic FARPROC, and the final line shows a nasty cast on the function call. For 7.6, the variable is named IsWow64Process, its type is BOOL (__stdcall *)(HANDLE, PBOOL) (the proper type signature for the IsWow64Process API), and the final line shows no cast. Beyond the casts, we can also see that applying the type signature also changes the types of other local variables: v5 in the first has the generic type int, whereas v5 has the proper type BOOL in the second.

Hex-Rays' built-in functionality won't work directly when malware looks up API names by hash, or uses encrypted strings for the API names: the decompiler must see a fixed string being passed to GetProcAddress to do its magic. Although the malware analysis community seems very comfortable in dealing with imports via hash and encrypted strings, they seem less comfortable with applying proper type signatures to the resultant variables and structure members. Only one publication I'm aware of bothers to tackle this, and it relies upon manual effort to retrieve the type definitions and create typedefs for them. This is unfortunate, as applying said types dramatically cleans up the decompilation output, but this is understandable, as the manual effort involved is rather cumbersome.

As a result, most publications that encounter this problem feature screenshots like this one (note all of the casts on the function pointer invocations, and the so-called "partial types" _QWORD etc):

(I chose not to link the analysis from which the above screenshot was lifted, because my goal here is positive assistance to the malware analysis community, and not to draw negative attention to anyone's work in particular. This pattern is extremely frequent throughout presentations of malware analysis; it is immaterial who authored the screenshot above, and I had other examples to choose from.)

I did not know how to resolve an API name to its type signature, so I simply reverse engineered how Hex-Rays implements the functionality mentioned at the top of this entry. The result is a function PrintTypeSignature(apiName) you can use in your scripts and day-to-day work that does what its name implies: retrieves and prints the type signature for an API specified by name.

The script includes a demo function Demo() that resolves a number of API type signatures and prints them to the console. It begins by declaring a list of strings: 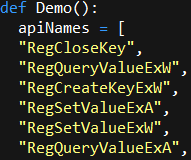 The output of the script is the type signatures, ready to be copied and pasted into the variable type window and/or a structure declaration.

Mostly I published this because I want to see more types applied, and fewer casts, in the malware analysis publications that I read. Please, use my script!