The U.S. Department of Defense released the highly anticipated Cybersecurity Maturity Model Certification (CMMC) version 1.0 on January 31, 2020. This model serves as a unified standard for implementing cybersecurity controls across the defense industrial base which applies to over 300,000 entities across the country. With the increasing amount of supply chain attacks disrupting and compromising sensitive information concerning national security, the CMMC seeks to rectify major malpractice via this uniformed model.

From the official CMMC Government Portal: “The Cybersecurity Maturity Model Certification framework includes a comprehensive and scalable certification element to verify the processes and practices associated with the achievement of a cybersecurity maturity level. CMMC can adequately protect sensitive unclassified information, accounting for flow down to subcontractors in a multi-tier supply chain.”

The current CMMC framework is based on a variety of pre-existing standards including the highly influential ISO 27001 and NIST SP 800-171, which both pertain to the protection of controlled unclassified information in non-federal organizations as well as general best practices when handling sensitive information of any kind that does not belong to you or the organization you may represent. The idea of a maturity model stems from the tier-based approach to compliance in which 5 total levels of maturity can be reached, each broken up into a variety of best practices and controls: 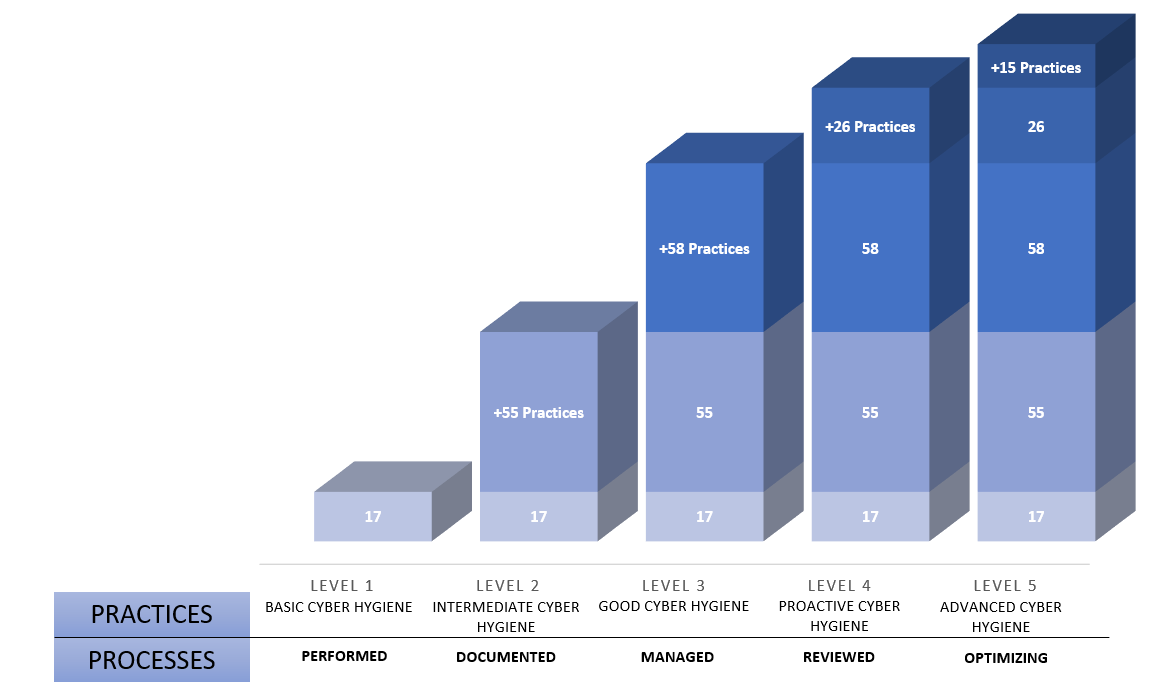 These best practices make up a total of 17 Capability Domains including Access Control, Risk Management, Media Protection, Incident Response, and more. The CMMC Accreditation Board breaks down these domains into the 171 best practices depicted in the graph I’ve created above.

With the topic of supply chain risk becoming increasingly relevant, and with the new Biden Administration revisiting and amplifying current Cybersecurity controls and measures, such as the CMMC, we will continue to explore the topic of federal compliance over the coming weeks, breaking down these aforementioned controls even further and helping you to understand where you may fall into this complex framework.

Within the past month, cybersecurity has made numerous headlines as attackers’ started taking advantage of the shift to virtual work. From the Colonial Pipeline hack that shut down much of the east coast’s gas supply, to the JBS attack that wiped out a portion of the United State’s meat supply. The need for security is finally becoming a consideration for many companies as they attempt to navigate an increasingly connected and vulnerable world. It’s becoming clear that blackhat hackers will continuously attack every part of the available infrastructure. With this being said, it’s clear that organizations need to strengthen their defenses. Included in those organizations are the world’s automobile manufacturers. This wasn’t always inherently obvious, as older cars were all mechanical, but as we move closer and closer to autonomous cars the need for security grows.

Fortunately, most new cars are being designed with security in mind. The trouble comes from the cars that are a little older, think five to ten years old, who have some technology (such as Bluetooth) but aren’t currently on the radar of auto manufacturers. These are the cars that can be the most vulnerable, as they weren’t designed with security in mind, and no new patches or updates are being delivered (or are even able to be delivered). Similar to how phones get security updates, cars can also receive patches, but doing so usually requires trips to the dealership (and potentially money), which most people do not do. All of this comes together to mean that there could be thousands upon thousands of vulnerable vehicles on the road today.

This fact became overwhelmingly clear in 2015 when two researchers (Charlie Miller and Chris Valasek), exploited vulnerabilities within a car remotely. Utilizing insecure wireless and mobile telecommunication stack within modern cars, they were able to remotely control the car from almost anywhere. This includes braking, steering, acceleration, even seemingly less important features such as the radio. After disclosing their findings to Chrysler, and seeing no changes, they disclosed their findings to Wired Magazine who made the information known to the public (video can be found here). Unbeknownst to them at the time of discovery, their vulnerability applied to 1.5 million cars.

Governments soon realized that they needed to lay out guidelines for auto manufacturers, as many weren’t concerned about cybersecurity even after seeing the effects that an exploit could have. This is where the main chunk of my research came from. The main guideline, named ISO-21434, is still being developed. This leads me to one of my biggest issues; the fact that this is being developed behind closed doors, making finding information about this standard fairly difficult. However, there are numerous second-hand accounts of the regulation that I was able to get information from. This standard serves to provide the first set of rules and regulations related to cybersecurity for manufacturers. It includes risk assessment methods, including asset identification, threat analysis, impact assessment, and vulnerability analysis. As well as the methods to manage, monitor, and respond to any incidents during every phase of the automobile’s life cycle. There were a few other regulations that I focussed on, but ISO-21434 will certainly be the most important in my research.

For the course of the summer, I’ve been tasked with researching automobile security as part of my internship with the Munich Cyber Security Program. This being a topic that was fairly foreign to me, I had to gain a little bit of background knowledge. Figure out exactly what I would be looking into, and why it was relevant. The information laid out in this first post is the baseline research that I looked into during my first week. The second piece of my internship will be completing weekly blog entries that will serve as documentation of my work. Each week, I’ll be posting to my LinkedIn profile. From here, my research could branch out in many ways, so be sure to keep an eye out for my next update.

When one hears forensics, they often jump right into the fantasy of crime shows, bad guys, and analyzing biological evidence in a lab. Occasionally there’s a plot point of using cell records to shatter someone’s alibi, but very rarely is there any true deep dive on what it takes to analyze a computer, cell phone, tablet, server, cloud, whole social media account, or even Fitbit. Despite the lack of visibility, there isn’t a day that goes by where one can escape hearing about a data leak, ransomware scenario, hacking, privacy and security laws, or how technology will somehow be the downfall of society. Digital evidence is beginning to outweigh all other types of evidence in criminal, enterprise, and civil matters. The proper handling, analysis, and knowledge of the digital landscape are of the utmost importance in handling and responding to most issues.

I think it’s important to quickly go over the current standard and best practices of forensic analysis. The National Institute of Standards and Technology (NIST) has broken it down into 4 basic steps when it comes to handling digital evidence.

Identification: Being able to identify what evidence (or device) is relevant to the investigation Collection: Copying the evidence in a way that is forensically sound and admissible in court (using write blockers, or taking a copy in such a way that doesn’t disturb the original)Analysis: Using a suite of tools and methodologies to analyze what was collectedPresentation: Creating a deliverable that contains all evidence gathered, how it was gathered, and proof of its existence

An important part of the analysis process is being able to make connections. If you have a phone, smartwatch, PC, and a user’s Twitter account, how do you put them all together to prove that a crime was committed? If you have four different file servers, an email server, and an active directory server, and 300 user accounts, how do you put all of the logs together to figure out where the data breach was? Typically, you would analyze each separately (usually with a different tool or methodology), and then manually and painstakingly put it all together to create a timeline of what happened. There are a handful of tools that boast about being able to make connections (such as Cellebrite’s UFED suite), but none can connect every single artifact in a way that is meaningful to examiners.

On its own, this is a clear issue. The individual analysis of sources takes up substantial amounts of time, even with multiple examiners. Then you add in that the lack of centralization of tools means that most places don’t have a way of splitting up work between analysts easily. This process further complicates investigations by combining multiple people’s results. To make matters even more challenging, the amount of data being analyzed is not getting any smaller. The International Data Corporation estimates that the average person created ~1.7 megabytes per second in 2020. According to a survey done by Forensics Focus in 2013 (the latest figure I was able to find), over half of the investigators said that at least half of their investigations involved more than a terabyte of data and that nearly 20% of all cases involved more than five terabytes of data. Considering the age of this data, and the fact that you can now buy cell phones with one terabyte of data from mainstream companies such as Samsung, I have to assume this figure is on the much higher side now.

The goal of my research this summer is to attempt to find a solution, or a set of solutions to address the issues of Big Data in forensics. I will be looking at open-source, commercial, and even built-in tools within server environments to find a tool or suite of tools that can help examiners tackle large amounts of data in practical ways. This is a very large task, which is why I am working with Ian Eubanks in this endeavor as we both work to find an answer to this.

Some issues already run into during this process is the lack of prior research into this topic. There are plenty of forum posts asking about tips and tools to handle large amounts of data, some small undergrad thesis’ that attempt to address this broadly, and a handful of small hour-long presentations from security experts that talk about the issue in general but offer no real solutions. What little information there is seems to be locked behind a paywall (SANS mostly). Since starting, most time spent has been on research and getting used to working outside of my room and plotting how to best tackle this project.