While attending the Magnet User Summit in Nashville, I had the opportunity to sit in on fascinating talks and labs. One of my favorites was the talk about Universal Windows Apps given by our very own Professor Yogesh Khatri and Jack Farley. As somebody who knew next to nothing about UWP apps, I was both impressed and surprised by Microsoft. Let’s talk about some of the highlights!

Firstly, what is a UWP app? The Universal Windows Platform is Microsoft’s vision for the future of Windows apps. This vision evolved to include the HoloLens and IoT devices in the equation for one SDK and one user experience. You may not think you use these, but the Windows 10 photo viewer, calculator, and settings menu are UWP apps.

The Microsoft Store securely delivers apps. This helps to ensure the integrity and authenticity of Windows apps. The app packages are also sandboxed, have very limited access to the win32 API, and no access to the registry or computer filesystem outside of their own container folder. That’s where Microsoft surprised me—sandboxing has been a hallmark of Mac App Store apps for years, and it’s great to see this essential security feature come to Windows.

You can manage permissions for these apps and these permissions are called “capabilities”. The apps are also all neatly organized into their own folders, each with a unique directory name. And this is where I am not at all surprised by Microsoft: there are FOUR different naming schemes for these apps and each scheme is used in a different place. This is the sort of confusing and complicated design choice that I would expect of the people who brought us… well, Windows. Further, to interact outside of their folder, they need to link to another process on the system called RuntimeBroker. This seems like a sloppy implementation since there will probably be numerous different RuntimeBrokers running at any given time.

App Use and Functionality

As for what sorts of artifacts you can find in these container folders, if there is any internet functionality in the app, there will be cookies, history, and so on. There are also folders for files that are synced across Microsoft accounts and a cache for large files that the app can recreate but would rather not.

These apps function like mobile apps in that when they are inactive, they are suspended to conserve resources. The threads are stopped but the app stays in memory (unless Windows needs the memory for something else). Memory pages are stored in C:\swapfile.sys if they need to be set aside for a while. It’s possible that these pages will be compressed.

There was a lot more to talk about, too: what’s leftover after an app is uninstalled (lots of registry stuff!), how you can get lists of installed apps, and so on. The slides and tools from the presentation can be found at https://github.com/ydkhatri/Appx-Analysis if you want to learn more.

I am grateful to have had the opportunity to attend this talk and many others at the conference. Thank you to the LCDI and Magnet Forensics for making this possible!

I had the honor of attending the Magnet User Summit 2019 in Nashville on April 1-3. This was my first professional conference as a junior at Champlain College.  It was exciting to be able to correlate the presentations with the knowledge I’ve gathered in my courses. The conference was also a great networking space where I got to meet professionals in the digital forensics industry. I participated in various sessions, both lectures and labs. One of the sessions that I really appreciated was on Using Memory Forensics Analysis to Guide your Investigation by Aaron Sparling, Computer Forensic Examiner with Portland Police Bureau. 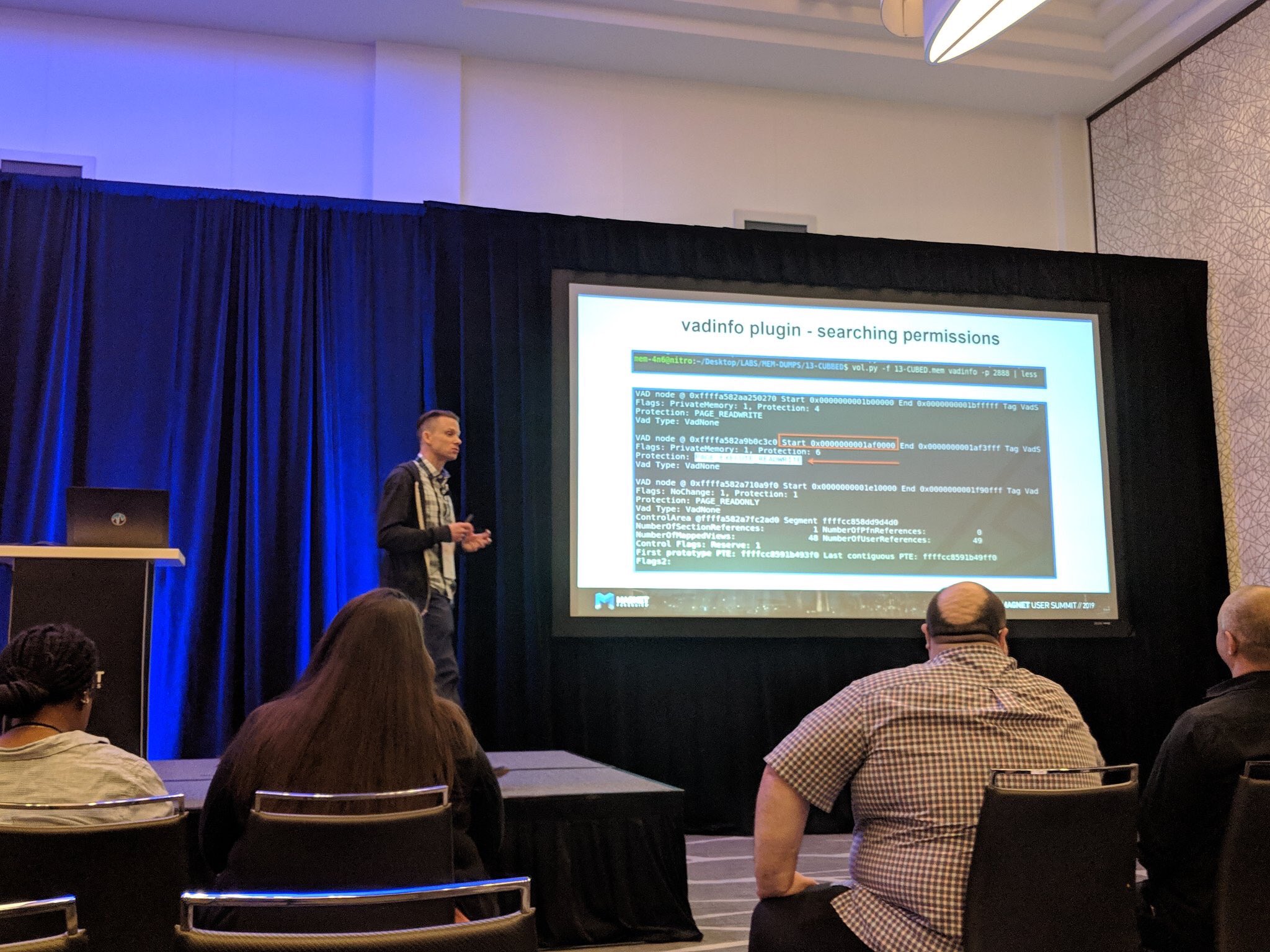 Memory analysis speeds up traditional forensic examinations and can drive the investigation. On a Windows system, memory includes physical memory (RAM) and system files such as pagefile.sys and hiberfil.sys. There are a lot of forensic artifacts that reside in memory which should not be ignored. Almost every process executed on a computer goes through RAM at some point. Not to mention that memory acquisition can be done in a fraction of the time compared to hard drive acquisition which usually takes hours.

Some of the analysis tools shared with us include: Bulk Extractor, Photorec, Scalpel, Volatility, Page_Brute.py and YARA. You can also use strings and GREP/REGEX. I had a bit of experience with all these tools except for Yara which was completely new to me. It is a tool that allows the analyst to write textual and/or binary patterns to hunt for malware or anything else they choose. Page-brute.py uses YARA rules to parse pagefile.sys within a command-line interface. Volatility is good for decompressing hiberfil.sys to .bin for faster analysis. It is extensible i.e. you can write your own plugins or modify existing plugins for your analysis.

In addition to this lecture, I also took part in a lab on memory forensics run by Jamey Tubbs, Magnet’s Director of Training Operations and Curriculum Development. During this hour and a half lab, we were able to build a case/user profile from 2GB of RAM using Magnet Axiom Process and Examine. We found crucial artifacts such as user SID, browser search terms, their timestamps, and local file paths. Such information gives the investigator direction and speeds up the process once the hard drive is acquired.

The importance of preserving memory when dealing with a live system cannot be overstated. The conference was quite informative and a great first experience. It was also inspiring to see all the projects Magnet Forensics are working on and how beneficial their products have been to the industry both within the private sector and with law enforcement.

The post Using Memory Forensics Analysis to Guide Your Investigation appeared first on The Leahy Center for Digital Investigation.

Recently, I had the great opportunity to attend the 2019 Magnet User Summit hosted by Magnet Forensics in Nashville, Tennessee. Presenters at the Magnet User Summit dedicate their time to presenting new research, demonstrating new techniques, and teaching users in the fields of digital forensics and investigation. There were many great presentations and labs that I attended and learned so much from!

Windows PowerShell is a command shell and scripting language created by Microsoft. It provides more features and functionalities than Windows basic command line. System and network administrators use PowerShell for automation and also forensic investigators. PowerShell excels at automation and acquiring evidence and artifacts from the system. It has recently been made available for other operating systems including Linux and OSX. Making it even more powerful and useful. Python is an object oriented scripting and programming language. It’s a simple language that’s easy for beginners but still powerful enough for the more experienced users. It’s been integrated into many popular tools for digital forensics, cybersecurity, and incident response.

One point that Hosmer highlighted is that Microsoft’s PowerShell really excells at evidence and artifact acquisition, while Python is good at analysis and examination of data. Therefore, combining these two programs would create a powerful platform for DFIR. To accomplish this, he has created two methods of integration between the two programs.

With the rise of cloud infrastructure and international use, Hosmer also demonstrated that PowerShell is capable of interacting with and accessing Microsoft Azure logs. Azure is Microsoft’s cloud platform created for large businesses and enterprise. Cloud has become a large source of data and potential evidence for digital investigators, but is often harder to access and difficult to integrate into programs. In order to interact with azure, the user installs a PowerShell module called ‘AzureRM’  using the ‘Install-Module’ cmdlet in PowerShell. Once installed, PowerShell will have access to thousands of more powerful cmdlets dedicated to Azure.

Over my two days at Magnet User Summit, I met with many professionals and had a great time attending presentations on new technologies and techniques. I also learned how to use the tools created by Magnet and improve my forensics skills. While I really did learn a lot from the summit and had plenty of fun too. I am glad I got this great opportunity to learn and network with industry professionals. Thank you to both the Leahy Center for Digital Investigation and Magnet Forensics for giving me this great opportunity.