I use my tools dns-pydivert and dnsresolver.py for dynamic analysis of software (malware and benign software).

On the virtual machine where I’m doing dynamic analysis, I disable IPv6 support.

I install dnslib and run dnsresolver.py with a command like this, for example:

The first command is a resolve command: DNS A queries for example.com will be resolved to IPv4 address 127.0.0.1 with TTL 1 minute.

The second command is a forwarder command: all DNS requests not handled by other commands, are forwarded to 8.8.8.8. Make sure that the IPv4 address of the DNS server you forward requests to, is different from the VM’s default DNS server, otherwise this forwarding will be redirected by dns-pydivert too.

I don’t use this second resolver command if the VM is isolated from the Internet, I only use it when I want to allow some interaction with the Internet.

When dns-pydivert.py and dnsresolver.py are running, DNS traffic is altered according to our settings. 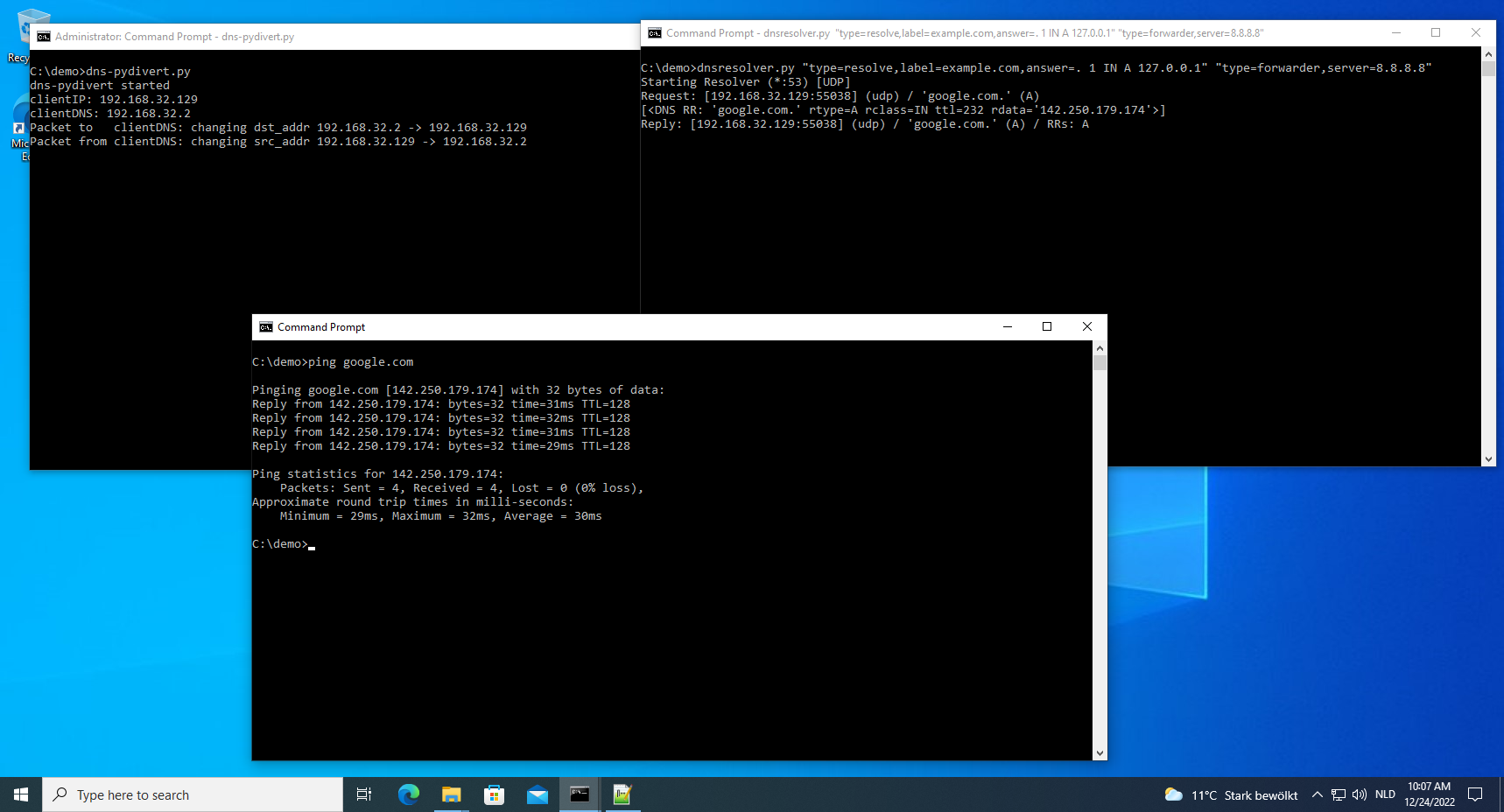 When I do the same (picture above) for example.com (ping example.com), the query is redirected to dnsresolver, which resolves this to 127.0.0.1 with a TTL of 1 minute (per resolve commands configuration).

Thus the ping command pings the localhost, instead of example.com’s web server. 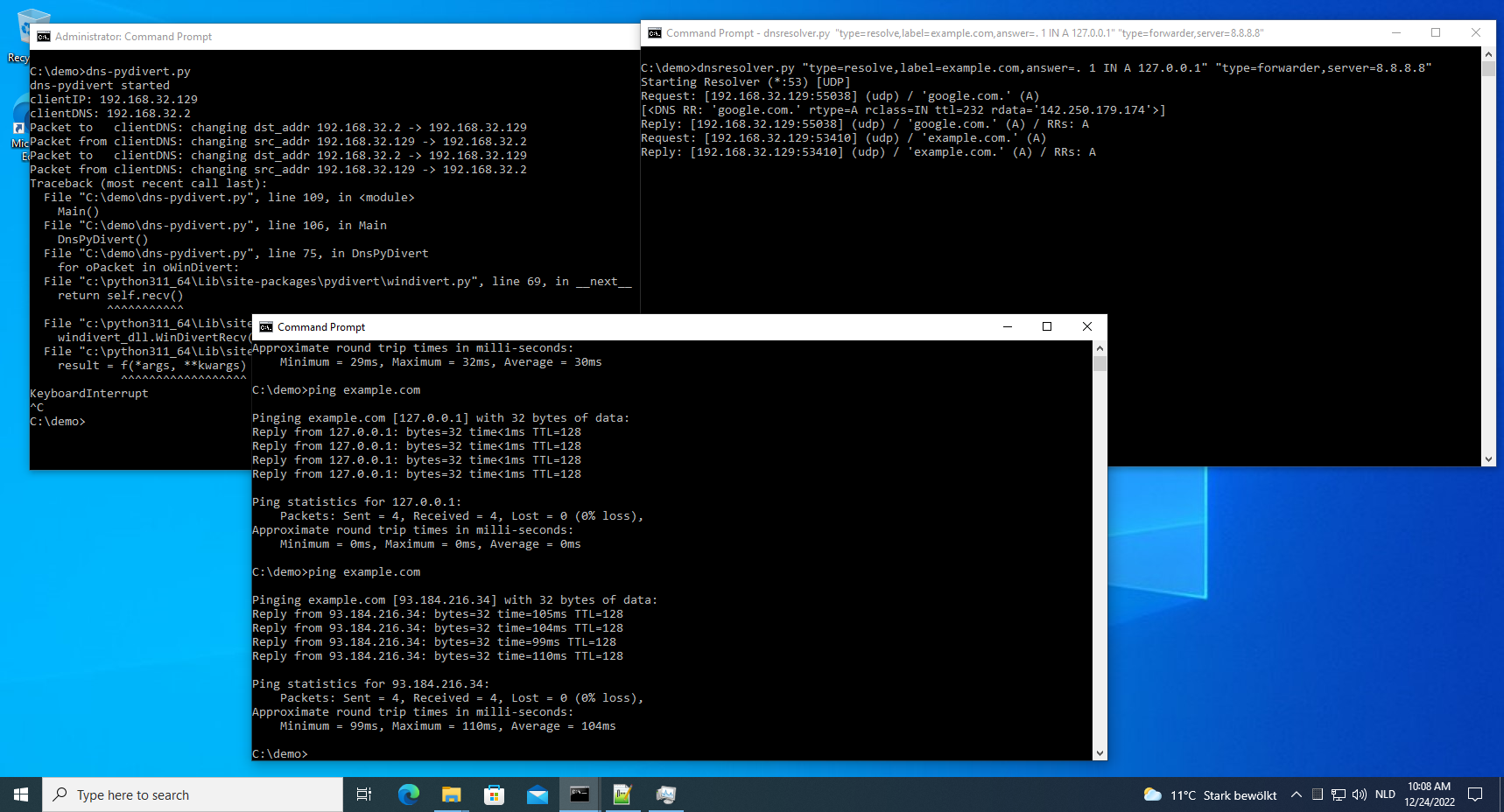 And when I kill dns-pydivert (picture above) and issue a “ping example.com” again after waiting for 1 minute, the query is no longer redirected and example.com’s web server is pinged this time.

I used ping here to illustrate the process, but often it’s HTTP(S) traffic that I want to redirect, and then I also use my simple-listener.py tool to emulate simple web servers.

Remark that this will only redirect DNS traffic (per the configuration). This does not redirect traffic “directed” at IPv4 addresses (as opposed to hostnames).

This can be done too with pydivert, and I will probably release a tool for that too.

If you are interested, I’ve put a spring4shell exploit capture file on my GitHub.

First HTTP request in the capture file, is just a test query.

Second HTTP request is the exploit that drops a webshell.

To better understand how nmap does service detection, I implemented a tool in Python that tries to do (more or less) the same. nmap detects what service is listening on a port, by sending it probes (particular byte sequences) and matching it with expected replies. These probes and replies can be found in file nmap-service-probes.

It allows me to experiment with service detection.

By default onion-connect-service-detection.py connects to service ports over the Tor network.

Here is an example where I use the tool to detect services on the 10 most popular ports (top:10) of example.com. With a time-out of 5 seconds. 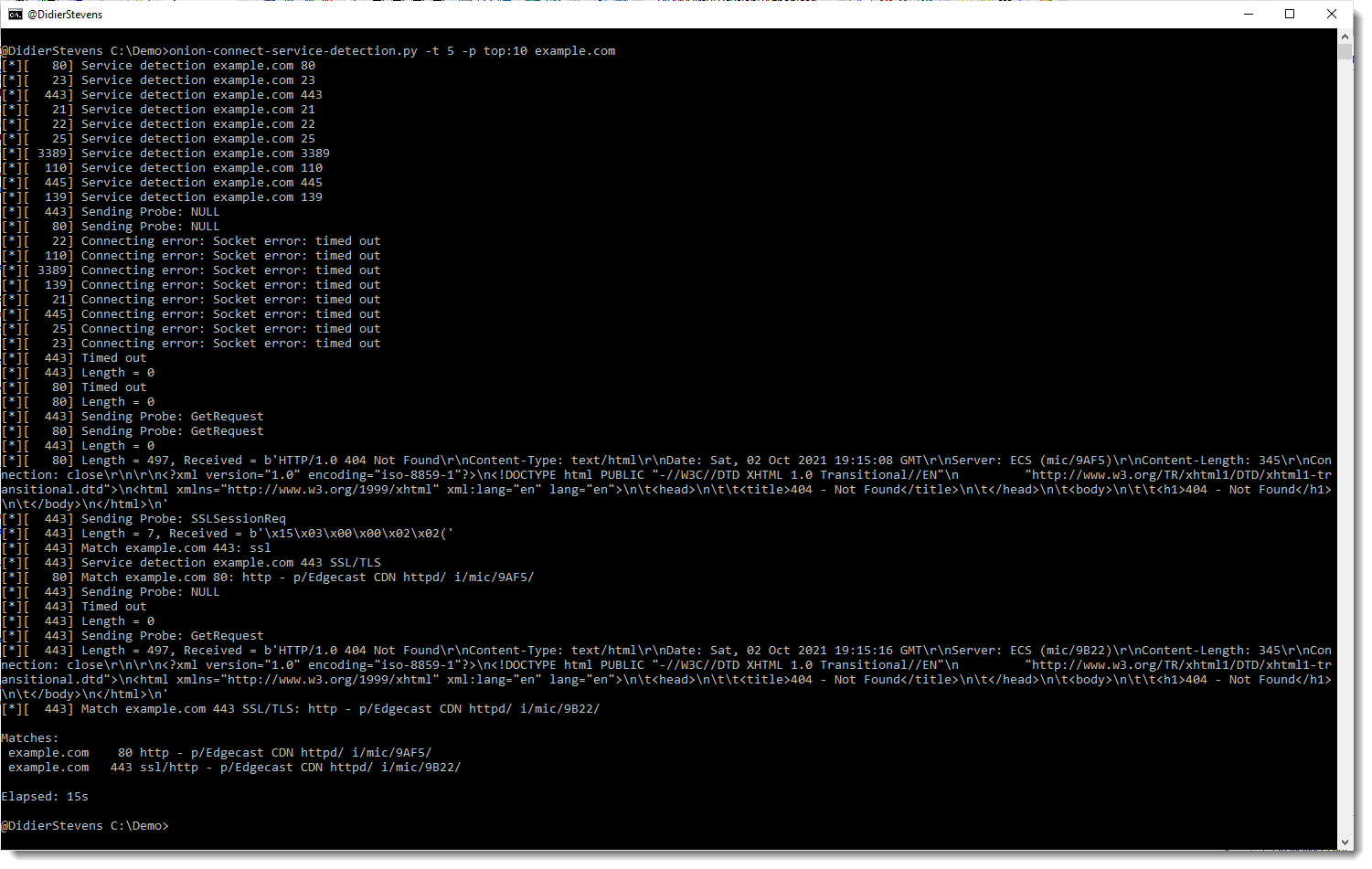